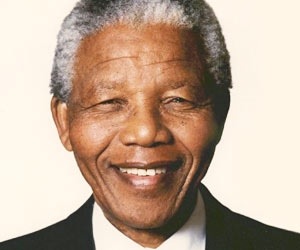 Invictus
BY WILLIAM ERNEST HENLEY
Out of the night that covers me,
Black as the pit from pole to pole,
I thank whatever gods may be
For my unconquerable soul.

In the fell clutch of circumstance
I have not winced nor cried aloud.
Under the bludgeonings of chance
My head is bloody, but unbowed.

Beyond this place of wrath and tears
Looms but the Horror of the shade,
And yet the menace of the years
Finds and shall find me unafraid.

It matters not how strait the gate,
How charged with punishments the scroll,
I am the master of my fate,
I am the captain of my soul.

Unbelievably, this poem, which sounds as if it was written specifically for the great Nelson Mandela, was first published in 1875.

Mandela, son of a Chief, stepped into history and became the embodiment of “Invictus.”

He was born to achieve. Evil, racism borne of fear, prison confinement could not stop him. He was royalty. He did not work as a leader, he was a leader.

Mandela’s well lived life proves the words of Rev. Martin Luther King, Jr, “The arc of the moral universe is long but it bends toward justice.” Rev. King spoke these words with certainty, and Mandela lived out this belief without hesitation.

The Bible instructs us in Romans 12:21 to “be not overcome by evil, but overcome evil with good.” Mandela obeyed, and his life serves as the North Star for the rest of us.